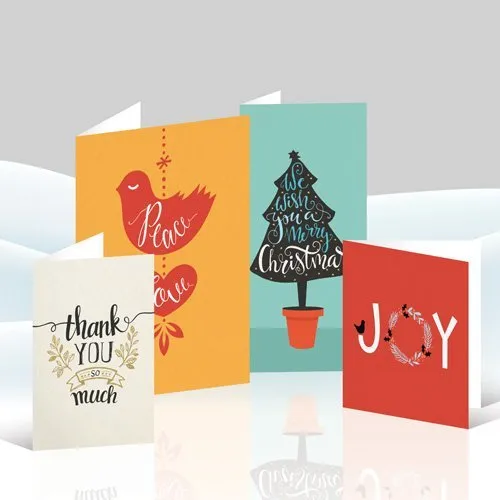 Lots of people use printing services for their personal and professional projects—luxury business cards, printed stationary, wall planners and calendars—but one couple turned their printed goods intoa luxury product that is now sold in the likes of Harrods, John Lewis and Paperchase.

Pennie Bryant and Frank Nicholls created their hand-crafted greetings card company, Tache, from side hustle to lucrative business, after struggling in their careers in fashion and web design.

“In many ways, ours is a typical millennial love story,” said Pennie. “Two young creatives meet at a music festival, struggle to make ends meet with their careers, so as well as starting a life together, we also started a business.”

When they first met, Pennie was facing financial hardship and working in unpaid internships in London, and moved in to Frank’s “run-down flat” in Bournemouth. On her 23rd birthday, Frank made her an elaborate birthday card consisting of a 3D cut-out of two cartoon cats, one handing a heart-shaped balloon to the other.

At the time, neither Frank nor Pennie thought anything more of the card than it just being a lovely homemade birthday card, and their careers started to progress. Pennie got a good job in visual merchandising, Frank started to gain recognition for web design, but after Pennie’s employer moved and she was faced with a long commute, she resigned.

“During this time I was in the house all the time and struggling to stay positive, when one day and I chanced upon the birthday card that Frank made for me,” Pennie said. “The sight of the card made me smile immediately and then, once again, inspiration kicked in.”

Pennie started to realise that the card was something special. Unlike normal greetings cards, which are given as an accompaniment to the gift, this card was so elaborate that it was like a gift in itself.

“We designed our first ten cards at the end of November for Christmas 2013, with quirky and creative designs that were unlike anything else on the market,” said Frank. “All of our cards came with a specially designed printed envelope and matching envelope seal, creating a modern twist on the traditional wax sealed envelopes.”

Tache (which is actually named after the couple’s cat) was an instant success. Within its first year of trading it was stocked in over 100 independent retailers, including Harrods, John Lewis, Liberty London and Paperchase. It’s now approaching its seventh year of business.

But it wasn’t all plain sailing, with the couple having the creative backgrounds to create the product, but no previous experience of running a business.

“It’s been a huge challenge to learn everything related to business. Both of our backgrounds were purely creative,” said Pennie, “so neither of us had any previous experience of running a business, and both had to learn everything as we went along.”

But it worked, and the couple’s cards are now stocked in thousands of outlets across the UK and internationally, and Tache was recently named Best Handmade Range at the 2019 Henries Awards.

“We aim to create cards that will be viewed as a personal gift that the recipient will want to keep forever rather than throw away,” said Frank. “And it seems to be working – we’ve had a number of customers tell us that they loved their card enough to put it in a frame.”

If you’re looking for printing services in Portsmouth or Hampshire,get in touch with us today.