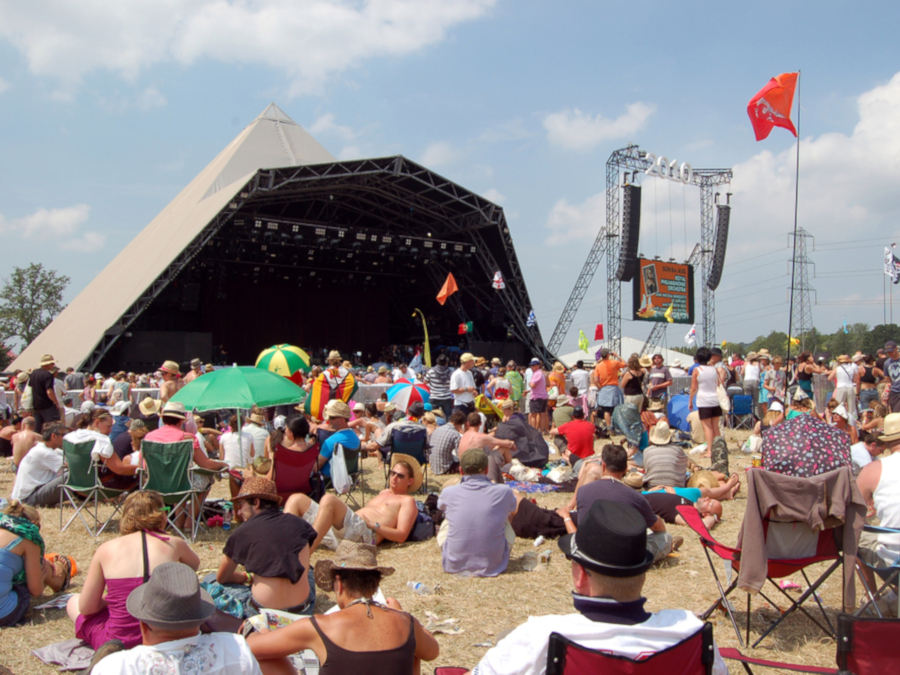 Since it’s inception in 1970, Glastonbury has firmly established itself as one of the biggest festivals in the world, with Michael Eavis bringing the crème de la crème of the music world to Somerset on a consistent basis.

To tie in with this year’s festival, we asked our Head Designer Gary Hawkes to cast his expert eye over some of the iconic Glastonbury lineup posters that have been produced over the years.

It’s that time of the year where Glastonbury is fast approaching. And looking back at the festival from years gone by, one thing that’s constantly evolving is how Glastonbury advertises their festival.

Often with many trends, they can change quickly and become very outdated. But if the history of Glastonbury posters is anything to go by, their visual identity through poster design will bring back memories to any avid concert goer.

I have been reminiscing on what bands I loved seeing headline that year. For me, I will always remember 2013 when Arctic Monkeys headlined the Pyramid Stage. I believe if you have a favourite year, it’s almost natural to remember what other things stood out for you that summer. But one thing that you may or may not remember is what the poster looked like to advertise the acts.

Glastonbury has commented on their visual identity: “We have a lot of artists and 47 years of history so we don’t normally single any one designer/artist out I’m afraid. ‘Tis all a group effort!”. This could explain why there has been a lack of focus on the Graphic Design element of the festival over the years.

So which are the posters that stand out for me and which ones were a complete miss?

Van Morrison headlines here and this is a fantastic two-tone poster that delivers with a great balance of type and image. A simple reflected image gives this poster strong symmetry with the peacock illustration and the Pyramid stage shooting a beam into the night sky. The acts all have space on the poster to be able to breathe and differentiate between the three categories of music, film, and theatre.

Peace and love, man. Looking back at 1986 I can appreciate where this design differs from the rest. Promoting vibrant colours, with a really strong logo concept, which steers away from any previous attempts to ‘brand’ the festival. Historically it’s known to brand a festival can carry its complications, by many bands looking too much like a brand instead of an act. So this poster carries a great blend between fitting in the Glastonbury style and its easy to digest.

How did they get it so wrong with just 3 years apart? A huge change here going from 1986 with an easy of the eye take, all the way to this questionable lyric sheet, looking piece of work.

The designer for 1987 completely threw out the rule book about best practices. This is lazy design if I’m being critical. Most disappointing of all, all the acts have been thrown together in the same sized font, which has then been centrally aligned continuously running down the page. Enough to make my eyes completely switch off and focus my attention on something else. Next!

Oh, the nineties. What a decade that gave us performances from Red Hot Chilli Peppers, Radiohead, Blur, Bob Dylan, Morrissey and more. What can’t be said as memorable would be the typically bad poster designs throughout the ’90s?

Although the ’93 poster is bad, it’s probably the best pick out of the bunch in terms of having some character added to the design rather than slapping the acts all in one paragraph style.

Although I can appreciate setting the festival name in a larger, more playful hand-drawn font that uses the colours from the Glastonbury icon mark. Apart from that, the rest of the poster is easily forgettable.

So, let’s get to the good stuff.

A decade later and with 2003 going down as the fastest selling Glastonbury to date, with all tickets selling out in 24 hours. This poster definitely arrived to the scene in some fashion, which looking back was a welcoming change from the older artwork which had become visibly outdated in such a short time.

Looking at this poster it welcomes in a new change. Bigger typography, which helped acts stand out from each other, all the way down to a stronger colour palette.

The man responsible for these changes is Stanley Donwood, notoriously known for creating all of the Radiohead artwork. Also, it should be mentioned he took over in the commission for the poster designs and illustrations for Glastonbury since the early ‘00s.

Since 2015, Glastonbury have adapted a multi-coloured, more playful theme in all of their posters. The only thing that has been significantly tweaked and changed in this time are the acts who are performing.

The fact that the style hasn’t changed in 4 years gives me a good indication that they are moving with the times instead of producing posters from yesteryear that were unimaginative. Whereas now they are capturing the imagination of a new generation, and as tickets are hard to come by and financially more expensive, the whole festival has come into a new era of artists, and these new posters are a really good representation of where the festival sits in the present day.

All the headliners can be seen from the top line and working down the list are the acts who will perform on other stages. Hierarchy is good, use of colour really works well especially as the background colour has stayed black since 2016, it just seems to work.

Here at Headline Printers we print posters for festivals and gigs up and down the country. Check out our poster printing options here.