About Headline Printers | A Family Run Business in Havant

Established in 1984 Headline Printers is a family-run business, that has grown from one man in a garage to a thriving local business over the last 36 years.

David Barraclough served in the Royal Navy from 1963 until 1985. In 1983 David made the decision to leave the service at 40 and decided to teach himself how to print, as this appealed to him, and was the way forward to starting a Printing business.

Headline Printers was established in 1984 in David’s garage in Stakes Road in Purbrook with the purchase of an A4 Litho press, a photo typesetter and a light box for making litho plates. In 1987 Headline moved to a purpose built print shop which was also extended onto a premises David purchased.

Very quickly there were eight members of staff and the business was growing rapidly, 1987 also saw the business investing in Desk Top Publishing software and new computers. Both David and his 12 year old son James attended some DTP classes at Southampton University that a friend of David was teaching at the time.

David’s son James joined the business part time in 1993 and full time from 1995, and now runs Headline on a day to day basis.

Over the next 10 years the business continued to grow and it was necessary to move to our current location in February 1997, which was much larger and purpose designed. David and his family also moved in the same premises, this undoubtedly enabled the business to grow very quickly.

During the period between 1997 and the present day Headline Printers has invested heavily in the latest technology and machinery.

Our current plant list includes 2 and 4 colour Heidelburg presses, a Konica Miolta Digital press, 2 Canon large format printers and a Roland Versa Camm Printer Cutter. Along with numerour pieces of finishing equipment and a state of the art design studio.

In 1999 David’s second son Stephen joined the business and is now the print manager for Headline.

All three of David’s children now work for Headline Printers as David’s daughter Louise joined the company, and we hope a couple of the next generation will get involved as well.

As we are a family run business, we know that from your initial contact with us, right through to receiving your completed job, we will endeavour to make your experience with Headline Printers a pleasing and worthwhile one.

Our professional and courteous staff work to provide the quickest turnaround, to the highest quality possible, meeting your requirements and specifications. Our presses are working every day to produce letterheads, business cards, compliment slips, flyers, NCR forms and many other printed materials.

We do believe, however, that these printing tools are only as good as the people who operate them. For this reason, we have some of the most qualified press professionals in the area.

Please contact us today on the form below if you have any questions, or if we can help you with anything.

We would love for Headline Printers to be your new Business Printing Partner as we move in to 2021 and beyond.

David is our Managing Director, he started Headline Printers in 1983, some two years before leaving the Royal Navy, serving as a Naval Officer. The company started out in a garage behind David’s home in Stakes Road, Purbrook. Due to expansion of the company David moved the business to a purpose built factory in 1987, behind an Off-licence and video shop he owned in Purbrook. Due to further growth, the company moved again in 1997 to its current location in Bedhampton, the factory is now located behind David’s home.

David is still involved on a day to day basis helping out where he is needed, and plays an active part in the production and delivery of our printing.

David is a keen golfer, and he attends Nuffield Health Club several times a week. He is also a keen follower of Manchester United and has supported them prior to the Munich tragedy. 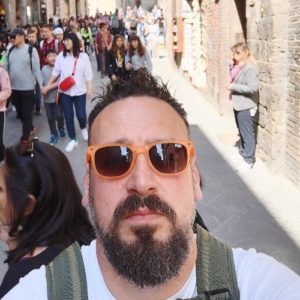 James is one of the Directors of Headline Printers, he has grown up in the Print & Design industry and has over 30 years-experience, attending his first DTP class with his father David at Southampton University at 12 years old!  He started to work part-time in family business while at College, before coming on board full time at 21 in 1996.

The Printing industry has changed a lot over the last 30 years, when he started here we were creating artwork on PC’s, but still using paste up boards to make the final artwork, before making film and then producing plates for the presses. That grounding has given him a full appreciation of where we are today with the technology we use. James worked in every aspect of the business during his early years with us and has a full understanding of every part of the business and how it works.

He finally settled into the design studio and has trained many young people to become very capable designers, and members of the working community. Today he heads up the day to day running of Headline Printers and manages the accounts and marketing side of the company, while also mucking in when needed with the design team.

In his spare time, James loves nothing more than spending time with his family, and he loves to travel, see the world, the sites, sample the food and experience the local culture. His favourite holiday destination is Italy, but has been to Hong Kong on many occasions where he lived for a couple of years as a child while his father was in the Navy. He has also visited Shanghai and Singapore for their F1 Grand Prix’s and is a Pompey fan, and a former season ticket holder at Fratton Park. The most unusual place he has visited is Azerbaijan.

Over the last few years James has visited Sweden, Denmark, Finland, The Netherlands, France, Italy, Greece, Hong Kong, Singapore, China and the USA. He has trips planned to Germany, Austria and Iceland in the next 6 months, and plans to visit many more places as restrictions start to open up. 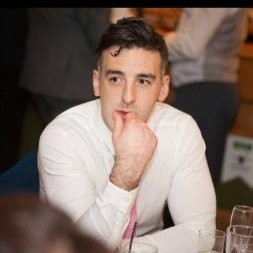 Stephen is our Head of Production and runs our Heidelberg and Konica presses, and oversees the finishing department as well.

He is a keen handyman and helps to maintain the premises when required, lending his hand to roofing, gardening and general maintenance, as well as building furniture.

Stephen spends most of his weekends with his two boys, playing and watching football, especially when Spurs are on. He also loves watching them play for their teams. He enjoys keeping fit at the gym and spending time with his lovely girlfriend. 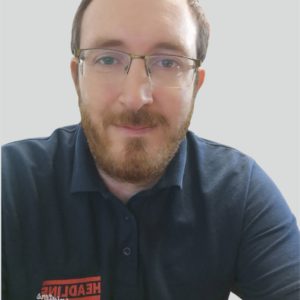 Gary joined Headline Printers in 2003 as an 18 year old trainee, and has been with the company for nearly 20 years. Gary is often the first port of call for our customers and helps them with getting their requirements from concept to print. Whether it’s an Idea on a scrap of paper that needs fully designing or just a file that needs tweaking to be print ready, Gary is able to turn these into amazing designs while also advising on the best stock / finishes to help make your printing stand out even more. He enjoys dealing with all customers and is often praised for the help and advice he provides, often exceeding their expectations.

When not working (incredibly hard), I like to spend time with Family and Friends. With a household containing 2 girls, 3 dogs, a little gary on the way and a girlfriend that’s not bossy at all, there’s always something to keep me entertained and busy. Having recently bought a house, most of my spare time is currently taken up stripping wallpaper, sanding, painting and erecting flat pack furniture.

When I do get some rare time to myself, I like to watch sport and attempt a football bet or two. I have recently taken up cycling to work and finding I enjoy this, plan to attempt some longer trips with friends at weekends, stopping off at a few pubs along the way.